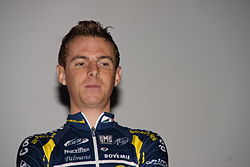 Riccardo Riccò (born 1 September 1983) is an Italian professional road bicycle racer, who is suspended from all competition until 2024. He was previously ejected from the 2008 Tour de France for doping violations and suspended. Riccò returned to competition in late 2010, but in February 2011 he was fired by his team, Vacansoleil–DCM, after he became seriously ill allegedly through a self-administered autologous blood transfusion. He then signed to UCI Continental team Meridiana–Kamen.

On 19 April 2012 it was announced that he had been suspended for 12 years effectively ending his career.