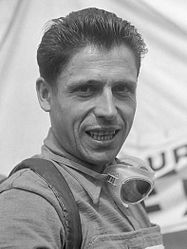 Antonin Rolland (born 3 September 1924) is a French former professional cyclist who was active from 1946 to 1963. Rolland won stages in the Tour de France and in the Giro d'Italia. He was born in Sainte-Euphémie, Ain.

In the 1955 Tour de France, Rolland led the general classification for twelve stages, but his team captain Louison Bobet wanted to win his third consecutive Tour, so did not help Rolland to defend the lead. Rolland ended in fifth place that year, his best Tour de France result in his career.