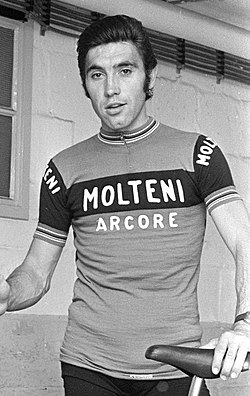 Édouard Louis Joseph, Baron Merckx (Dutch: [mɛr(ə)ks], French: [mɛʁks]; born 17 June 1945), better known as Eddy Merckx, is a Belgian former professional road and track bicycle racer who is among the most successful riders in the history of competitive cycling. His victories include an unequalled eleven Grand Tours (five Tours de France, five Giros d'Italia, and a Vuelta a España), all five Monuments, setting the hour record, three World Championships, every major one-day race other than Paris–Tours, and extensive victories on the track.

Born in Meensel-Kiezegem, Brabant, Belgium, he grew up in Sint-Pieters-Woluwe where his parents ran a grocery store. He played several sports, but found his true passion in cycling. Merckx got his first bicycle at the age of three or four and competed in his first race in 1961. His first victory came at Petit-Enghien in October 1961.

After winning eighty races as an amateur racer, he turned professional on 29 April 1965 when he signed with Solo–Superia. His first major victory came in the Milan–San Remo a year later, after switching to Peugeot–BP–Michelin. After the 1967 season, Merckx moved to Faema, and won the Giro d'Italia, his first Grand Tour victory. Four times between 1970 and 1974 Merckx completed a Grand Tour double. His final double also coincided with winning the elite men's road race at the UCI Road World Championships to make him the first rider to accomplish cycling's Triple Crown. Merckx broke the hour record in October 1972, extending the record by almost 800 metres.

He acquired the nickname "The Cannibal", suggested by the daughter of a teammate upon being told by her father of how Merckx would not let anyone else win. Merckx achieved 525 victories over his eighteen-year career. He is one of only three riders to have won all five 'Monuments' Milan–San Remo, Tour of Flanders, Paris–Roubaix, Liège–Bastogne–Liège, and the Giro di Lombardia) and the only one to have won them all twice or more. The other two are fellow Belgians Roger De Vlaeminck and Rik Van Looy. Merckx was successful on the road and also on the track, as well as in the large stage races and one-day races. He is almost universally regarded as the greatest and most successful rider in the history of cycling.

Since Merckx's retirement from the sport on 18 May 1978, he has remained active in the cycling world. He began his own bicycle brand, Eddy Merckx Cycles, in 1980 and its bicycles were used by several professional teams in the 1980s, 1990s and early 2000s. Merckx coached the Belgian national cycling team for eleven years, stopping in 1996. He helped start and organize the Tour of Qatar from its start in 2002 until its final edition in 2016. He also assisted in running the Tour of Oman, before a disagreement with the organizers led him to step away in 2017.