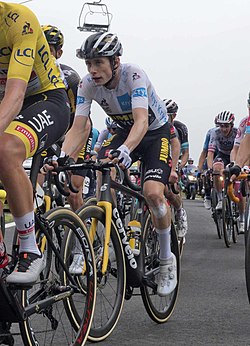 Vingegaard started as a youth rider for various Danish teams, making his breakthrough as a senior rider as part of UCI Continental team ColoQuick–Cult in 2016. He was known as a physical specimen and broke records in climbs, but still lacked major results on the road. As part of Team Jumbo–Visma, which he joined in 2019, he impressed at the Tour de Pologne and rode as a domestique for Primož Roglič at the Vuelta a España.

In the 2022 Tour de France, Vingegaard was a favourite for the GC together with Tadej Pogačar. Stage 11 included a final climb of the Col du Granon, a climb which had not been used since 1986 where Greg LeMond seized the yellow jersey from Bernard Hinault. Vingegaard's Team Jumbo-Visma attacked Pogačar on the Col du Télégraphe and Col du Galibier with Roglič while having Christophe Laporte and Steven Kruijswijk nearby and Wout van Aert up the road. On the final climb Vingegaard attacked at the 5 km mark, and dropped Pogačar for the second time in his career, except this time Pogačar was not able to make it back. Relentlessly advancing, Vingegaard won the stage and the yellow jersey and gained +2:51 on Pogačar. This put Vingegaard in the lead and relegated Pogačar to third, behind second-placed Romain Bardet. Vingegaard would not let go of the yellow jersey for the rest of the Tour, also dropping Pogačar on the final ascent on Hautacam, after holding up a moment to wait for Pogačar to catch up after a fall in an act of sportsmanship. His efforts ultimately won him the 2022 Tour de France.