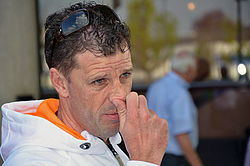 Franciscus ("Frans") Albertus Antonius Johannes Maassen (born 27 January 1965 in Haelen, Limburg) is a directeur sportif. He was a professional road racing cyclist between 1987 and 1995. He completed seven Tour de France stage races, including the 1990 Tour de France where he was involved in the Stage 1 breakaway that caused the rest of the race to be the most surprising Tour in over a decade. He was the only one of the four breakaway riders not to wear the Maillot Jaune, but he won the stage. He twice won the Tour of Belgium, and won the 1994 Tour de Luxembourg.

Since 2005, Maassen has been the assistant directeur sportif of the Rabobank, a Netherlands-based UCI ProTour team.