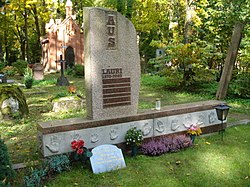 He was born in Tartu, became a professional in 1995 and rode for several French teams. He was the first Estonian rider to finish the Tour de France in 1997. Also in 1997 he finished in the top 10 of the World Championship.

Lauri Aus died while training near Tartu, when he was struck by a vehicle driven by a drunk driver.