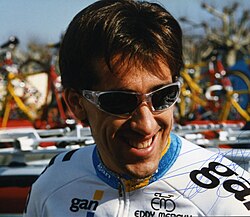 Frédéric Moncassin (born 26 September 1968) is a French former road racing cyclist. He turned professional in 1990 and retired in 1999. He competed in the men's individual road race at the 1996 Summer Olympics.

Moncassin was a strong roadman-sprinter known for his tussles with other riders in the last metres of a race. He clashed with Tom Steels and Mario Cipollini among others. He won 30 races and led the Tour de France for a day in 1996. He also came close to winning the Tour of Flanders and Paris–Roubaix. Procycling said when he retired: "It was the 1998 Tour that, in hindsight, probably spelt the end for Fred. Under intense pressure to come up with a stage win, he struggled through the first week, only to see the race collapse around him as the Festina Scandal took hold. His unfashionable criticism of Richard Virenque - "he's an asshole and you can quote me," he told the French paper 'La Dépêche' at the time - allied to his own poor form, and his increasingly public concern that all cyclists were now tarred with the same brush, left him as a fringe character."

His name was on the list of doping tests published by the French Senate on 24 July 2013 that were collected during the 1998 Tour de France and found suspicious for EPO when retested in 2004.