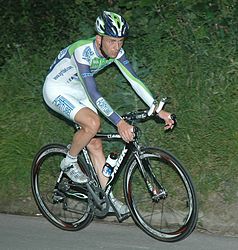 Freddy Bichot (born 9 September 1979 in Saint-Fort) is a French road racing cyclist who last rode for Véranda Rideau-Super U.

After rising from relative obscurity, in 2002 he won the French Amateur National Championship, yet later tested positive for testosterone. He was suspended for a year, and within months of returning to the amateur ranks, was signed as a professional to Team Barloworld.

Bichot participated in the 2004 Giro d'Italia, when he withdrew after stage 9. In 2005 he did the same, but withdrew after stage 13. That same year he won the first stage of the Étoile de Bessèges and also won the overall rankings of that race. He also took part in the 2006 Vuelta a España and the 2007 and 2008 Tour de France.