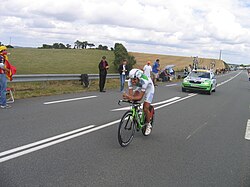 Eduardo Gonzalo Ramírez (born 25 August 1983 in Mataro) is a Spanish former road racing cyclist, who competed professionally between 2006 and 2011 for the Agritubel, Bretagne–Schuller and La Pomme Marseille teams.

In 2005, he won the overall rankings of the under-23 Tour de l'Isard d'Ariège. A year later he signed his first professional contract when he joined Agritubel. He won two stages in minor races in 2006 and made his Tour de France debut that same year finishing in 117th position. In 2007 he made his second Tour appearance, but was forced to withdraw after stage one due to a collarbone injury. Early in the stage he crashed into the back windscreen of a Caisse d'Epargne team car.