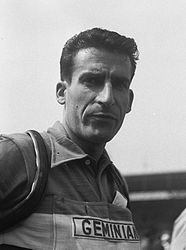 Raphaël Géminiani (born Clermont-Ferrand; born 12 June 1925) is a French former road bicycle racer. He had six podium finishes in the Grand Tours. He is one of four children of Italian immigrants who moved to Clermont-Ferrand fleeing from fascist violence. He worked in a cycle shop and started racing as a boy. He became a professional and then a directeur sportif, notably of Jacques Anquetil and the St-Raphaël team.

His professional career ran from 1946 to 1960. He won the mountains competition in the Tour de France in 1951. His best overall place was second in 1951 behind Hugo Koblet. He won seven stages of the Tour between 1949 and 1955 and wore the yellow jersey as leader of the general classification for four days. He won the national championship in 1953, the mountain competition of the Giro d'Italia in 1951 and third place in the Vuelta a España 1955. In 1955, Géminiani finished in the top 10 of the three big tours (Tour de France, Giro d'Italia and Vuelta a España), equalled only by Gastone Nencini in 1957. It has not been equalled since.

In 1977 he called doping checks the "cancer of cycling". He recognised that he had used drugs during his career. His strong personality earned him the nickname of Le Grand Fusil, which translates roughly as "Top Gun".