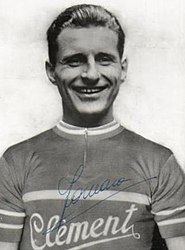 Pasquale Fornara (29 March 1925 – 24 July 1990) was a professional Italian road bicycle racer who gained fame in the 1950s by winning the Tour de Suisse stage race four times, a record that still stands to this day.

In addition to his Tour de Suisse achievements, Fornara won the 1956 Tour de Romandie and finished on the podium in two Grand Tours: a third place behind the legendary Fausto Coppi at the 1953 Giro d'Italia and a second place at the 1958 Vuelta a España behind Frenchman Jean Stablinski.