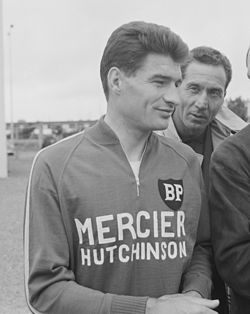 His distinguished career coincided with two other outstanding riders – Jacques Anquetil and Eddy Merckx. This underdog position may have been the reason Poulidor was a favourite of the public. He was known as "The Eternal Second", because he never won the Tour de France despite finishing in second place three times, and in third place five times (including his final Tour at the age of 40). Despite his consistency, he never wore the yellow jersey as leader of the general classification in 14 Tours (of which he completed 12). He did win one Grand Tour, the 1964 Vuelta a España. Of the eighteen Grand Tours that he entered in his career, he finished in the top 10 fifteen times.