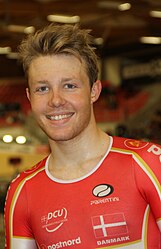 In 2015 he competed at the 2015 UCI Track Cycling World Championships in the men's omnium. He won the bronze medal in the team pursuit at the 2015 UEC European Track Championships in Grenchen, Switzerland. In September 2018 Team Sunweb announced that Pedersen would join them on a three-year deal from 2019, initially with a role as a domestique in the Flanders classics and the team's sprint train. In August 2019, he was named in the startlist for the 2019 Vuelta a España.