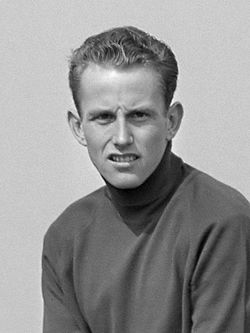 Hendrik Gerardus Joseph "Joop" Zoetemelk (pronounced [ˈjoːp ˈsutəmɛl(ə)k]; born 3 December 1946) is a Dutch former professional racing cyclist. He started and finished the Tour de France 16 times, which were both records when he retired. He also holds the distance record in Tour de France history with 62,885 km ridden. He won the 1979 Vuelta a España and the 1980 Tour de France.

He finished the Tour in 8th, 5th, 4th (three times) and 2nd (six times) for a total of eleven top 5 finishes which is also a record. He was the first rider to wear the Tour de France's Polka Dot Jersey as the King of the Mountains and even though he never won this classification in the Tour de France, he did win it in the 1971 Vuelta a España and was considered one of the best climbers of his generation.

He won the World Professional Road Championship in 1985 at the age of 38, with a late attack surprising the favorites of LeMond, Roche, Argentin and Millar. He completed a total of 16 World Championships which is notable considering more than half the field abandons nearly every World Championship and in addition to his win he has come in the top 10 seven other times. As of 2020, he is the oldest men's individual road race world champion.