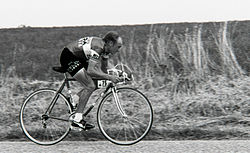 He became professional in 1973. The highlight of his career was his overall win in the 1977 Giro d'Italia. Pollentier is one of just three Belgian riders to win the Giro, the others being Eddy Merckx and Johan de Muynck.

In the 1978 Tour de France, he was the Belgian national champion when he won the stage arriving in Alpe d'Huez, took the yellow jersey and would have been involved in a battle with Joop Zoetemelk and eventual winner Bernard Hinault for the remainder of the race as the three were within +0:30 of one another. However, he was accused of foul play in the succeeding doping test, having used what was described politely as a pear-shaped tube (in fact a condom) of different urine held under the armpit and connected by a plastic tube to give the impression of urinating. Pollentier was uncovered after another rider at the test had trouble operating his own system of tubes and aroused the suspicion of the doctor, who then demanded Pollentier lift his jersey to show if he too was cheating. He was put out of the Tour immediately.

The affair took away most of Pollentier's credibility in international cycling. Even though he won the 1980 edition of the Tour of Flanders and he also came 3rd in the 1982 Vuelta a España where he was the beneficiary of a doping incident when the initial winner was disqualified bringing him to 2nd overall. 1984 was his last professional season; he finished outside the top 10 at the Vuelta and won the final grand tour stage of his career.

After his cycling career, Pollentier became a car tyre garage owner and founded a cycling school.

In "Seigneurs et Forcats du Velo" by Olivier Dazat, Pollentier is quoted as saying that he and another named Belgian cycling champion of the era had trouble after their careers because of drugs they had taken while racing. Dazat quotes him as saying: "I've never hesitated to confess that I spent three weeks under the surveillance of Dr Dejonckheere at the St-Joseph clinic at Ostend and that after treatment... I stayed under his control for another two years. Why hide it? It's impossible to come out of a situation like that without the help of a doctor.'