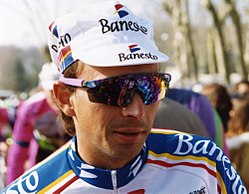 He won prestigious races such as the Critérium du Dauphiné Libéré and the Clásica de San Sebastián. A time trial specialist, he won many prologues and individual time trials in the early 1990s. In both the 1992 and 1994 Tour de France he finished in the top 5 of the prologue as well as the other ITT's. He won a stage in the 1994 Giro d'Italia, an ITT, and placed in the top 5 of both other time trials. He also rode strongly enough to come in 9th on general classification. In the 1994 Tour de Romandie he won the prologue and finished 2nd overall.

He also competed in track pursuit racing, and was bronze medalist in the discipline at the 1990 UCI Track Cycling World Championships in Japan.

De Las Cuevas retired to Réunion in 1999, where he founded a cycling school. He committed suicide there in 2018.