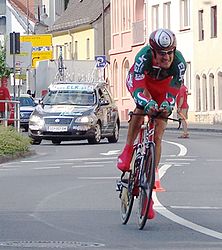 Ján Valach (born 19 August 1973) is a Slovak retired professional road cyclist. He represented his nation Slovakia in two editions of the Olympic Games (1996 and 2008), and later competed as a member of Dukla Trenčín–Merida professional cycling team before his official retirement in 2010. He now works as a directeur sportif for UCI WorldTeam Bora–Hansgrohe.