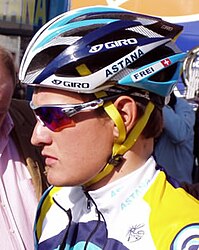 Thomas Frei (born 19 January 1985) is a Swiss road bicycle racer. Frei was Swiss Junior champion in road cycling in 2002. Between 2004 and 2006 he cycled for the Bürgis Cycling Team and won the Mountain Championship for U23 cyclists. In the 2007 and 2008 seasons, Frei rode for UCI ProTour team Astana before moving to BMC Racing Team for 2009 on a two-year contract. There he was roommate and domestique for future Tour de France champion Cadel Evans.

In his second season with BMC, Frei tested positive for EPO. He was withdrawn from competition by his team in April 2010 during the Giro del Trentino when the doping violation was revealed, before the team released him altogether.

As of August 2011, Frei was training full-time with the intention of returning to professional cycling upon the completion of his two-year suspension from competition.