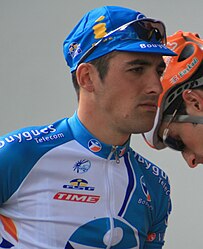 Sébastien Turgot (born 11 April 1984) is a French former professional road bicycle racer, who rode professionally between 2008 and 2016 for the Team Europcar and AG2R La Mondiale teams.

His biggest result came when he came in third in the 2008 Paris–Tours after leading in the last 100 metres, but was beaten by Philippe Gilbert of Française des Jeux and Jan Kuyckx of Landbouwkrediet–Tönissteiner. His third place was not expected by anybody but was a confirmation of his abilities, as demonstrated by his multiple French national track championship titles. In 2012, Turgot was runner-up in one of the most prestigious races of the cycling calendar, Paris–Roubaix.