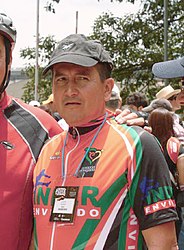 Luis Alberto "Lucho" Herrera Herrera, known as "El jardinerito" ("the little gardener") (born May 4, 1961 in Fusagasugá, Colombia), is a retired Colombian road racing cyclist. Herrera was a professional from 1985 to 1992 but had a successful amateur career before that in Colombia.

Luis Herrera is the second rider to win the King of the Mountains jersey in all three Grand Tours. The first was Federico Bahamontes of Spain.