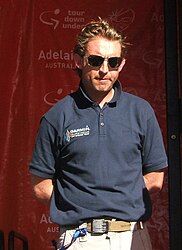 Matthew "Matt" White (born 22 February 1974 in Sydney, New South Wales) is an Australian former professional road racing cyclist. Currently White is working as a sporting director for Team BikeExchange–Jayco. White has also worked as a sporting director for Garmin–Cervélo but was let go because of doping offenses during his racing career. His most notable results are winning a stage of the 1999 Tour de Suisse and another stage victory at the 2005 Tour Down Under. He mainly worked as a domestique throughout his career, sacrificing personal ambitions to help his leader.