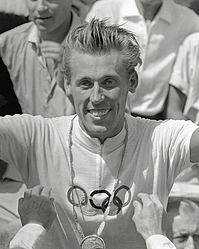 Viktor Arsenevich Kapitonov (Russian: Виктор Арсеньевич Капитонов, 25 October 1933 – 5 March 2005) was a Soviet road cyclist who competed at the 1956 and 1960 Summer Olympics. In 1956 he finished 32nd individually and 6th with the Soviet team. In 1960 he won the individual road race and finished third in the 100 km team time trial. His gold medal was the first for Soviet cyclists. At the end of the race Kapitonov mistakenly sprinted for the finish with one lap to go, surprising his main rival Livio Trapè. In the last lap Trapè sprinted first, but Kapitonov caught him up in the last few meters.