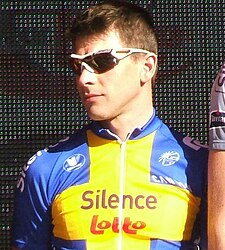 Jonas Ljungblad (born January 15, 1979 in Gothenburg) is a Swedish former road racing cyclist. He began his professional career with the Amore & Vita team in 2002 as a young helper, but after spending a season with Team Bianchi his career began to skyrocket with a very successful Australian excursion in 2004 winning the Tour of Queensland and the Herald Sun Tour.

In 2005 he acquired his biggest victory to date, winning the Swedish national championship. This, along with his win in the Route d'Vendee, attracted the attention of Unibet.com Cycling Team who hired him to be a helper to the likes of Baden Cooke and Frank Vandenbroucke.