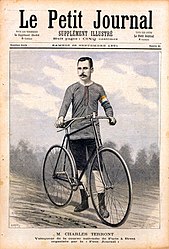 Charles Terront (9 April 1857 – 31 October 1932) was the first major French cycling star. He won sprint, middle distance and endurance events in Europe and the United States. In September 1891 he won the first Paris–Brest–Paris cycle race, which at 1,196 kilometres (743 mi) was more than double the length of any previous event. He rode a Humber bicycle fitted with prototype removable pneumatic tyres made by Michelin.

He won 54 major events over his 15-year career, was 'Champion of France' twice and 'Champion of Great Britain' twice.