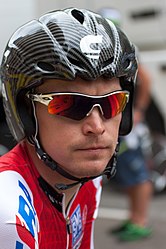 In 2015, he finished tenth at the Giro d'Italia, and he won the Russian National Road Race Championships.