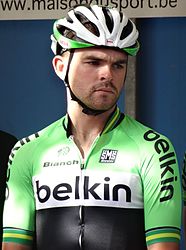 Jack Bobridge (born 13 July 1989) is an Australian former professional racing cyclist, who rode professionally between 2010 and 2016.

In 2019 he was convicted of drug dealing and sentenced to a four-year prison term. He admitted to using banned recreational drugs during his racing career, noting that he used cocaine in training leading up to major cycling events, including the Olympics.