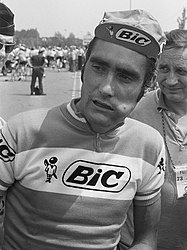 Jesús Luis Ocaña Pernía (pronounced [xeˈsus ˈlwis oˈkaɲa peɾˈnia]; 9 June 1945 – 19 May 1994) was a Spanish road bicycle racer who won the 1973 Tour de France and the 1970 Vuelta a España. During the 1971 Tour de France he launched an amazing solo breakaway that put him into the Yellow Jersey and stunned the rest of the main field, including back to back Tour champion Eddy Merckx, but abandoned in the fourteenth stage after a crash in the descent of the Col de Menté. Ocaña would abandon many of the Tours that he entered, but he finished in the top 5 of the Vuelta a España on seven occasions.