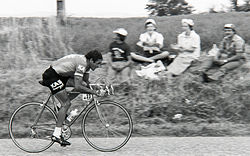 Vicente López Carril (2 December 1942, A Coruña, province of A Coruña - 29 March 1980, Gijón, Asturias) was a Spanish professional road racing cyclist from A Coruña. He finished among the top ten riders in the overall classification of several Grand Tours and third in 1974 Tour de France. During his career he also won three stages of Tour de France, as well as a stage in both Giro d'Italia and Vuelta a España.