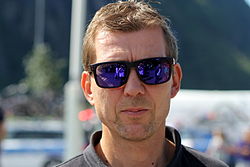 Atle Sturla Kvålsvoll (born 10 April 1962) is a Norwegian former professional road cyclist. He rode the Tour de France six times between 1988 and 1994, finishing four times. His best performance was in 1990, when he finished 26th and contributed to Greg LeMond's winning the yellow jersey. He competed in the individual road race event at the 1984 Summer Olympics.

In 2011 he has also accepted a role as directeur sportif for UCI Continental Team Plussbank Cervélo.