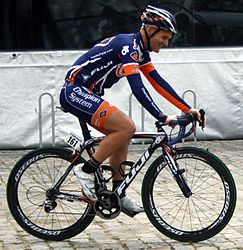 Bobbie Traksel (born 3 November 1981 in Tiel) is a Dutch former professional racing cyclist. In 2000, Traksel showed considerable promise by winning the Under-23 version of the Tour of Flanders and turned professional in 2001 with Rabobank. In 2002, Traksel's surprise win at the Veenendaal–Veenendaal showed his speed and bicycle smarts. But Traksel's achievements in 2008, highlighted by winning the Driedaagse van West-Vlaanderen garnered him wider respect in the cycling community. In 2010 he won Kuurne–Brussels–Kuurne after a long breakaway. The race was heavily influenced by the weather. Many favourites retired from the race due to the cold weather, rain and wind. Traksel proved himself as a real fighter with this win.

Traksel joined An Post–Chain Reaction for the 2014 season, after his previous team – Champion System – folded at the end of the 2013 season.