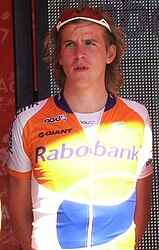 As a junior, Reus won the Junior men's road race during the 2003 UCI Road World Championships.

After missing out on the 2007 Tour de France Reus was training at the Col de l'Iseran on July 12, 2007. Reus fell from his bike and slipped into a coma. After team mate Michael Rasmussen won the yellow jersey during the Tour he dedicated the jersey to Reus. Eventually Reus would remain in coma until July 23. Reus returned to racing in the 2008 Tour of Missouri.

Reus took a year off from cycling between 2010 and 2011 after he was diagnosed with mononucleosis and lost form. He competed for Cycling Team De Rijke in 2011 and 2013, with a season at UnitedHealthcare in between.

At the end of the 2016 season, Reus announced his retirement.