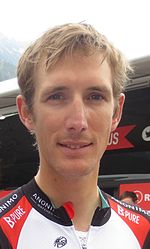 Andy Raymond Schleck (pronounced [ˈɑndi ˈʀɑɪmont ˈʃlæk]; born 10 June 1985) is a Luxembourgish former professional road bicycle racer. He won the 2010 Tour de France, being awarded it retroactively in February 2012 after Alberto Contador's hearing at the Court of Arbitration for Sport. He has also been the runner-up at the Tour twice; in 2009 and 2011. He is the younger brother of Fränk Schleck, also a professional rider between 2003 and 2016. Their father Johny Schleck rode the Tour de France and Vuelta a España between 1965 and 1974.