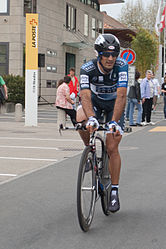 For the 2014 season, Haedo rode for the Skydive Dubai Pro Cycling squad. In September 2016 he was named as part of the UnitedHealthcare squad for the 2017 season.

He is the younger brother of fellow racing cyclist Juan Jose Haedo.