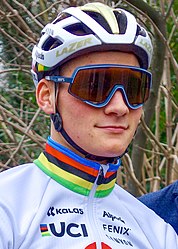 Mathieu van der Poel (born 19 January 1995) is a Dutch cyclist who currently rides for UCI ProTeam Alpecin–Fenix. He competes in the cyclo-cross, mountain bike racing and road bicycle racing disciplines of the sport and is best known for winning the Cyclo-cross World Championships in Tábor in 2015, Bogense in 2019, Dübendorf in 2020 and Ostend in 2021, the Junior Road Race World Championships in Florence in 2013, and twice winning the Junior Cyclo-cross World Championships, in Koksijde in 2012 and Louisville in 2013; the first rider to win multiple titles at that level. As well as this, Van der Poel was the winner of the 2018 Dutch National Road Race Championships in Hoogerheide, as well as the 2019 editions of Dwars door Vlaanderen, the Brabantse Pijl, and the Amstel Gold Race.

Born in Kapellen, van der Poel comes from a family of professional cyclists; his brother David is also prominent in cyclo-cross racing, winning the 2013 National Under-23 Championships in Hilvarenbeek. His father, Adri, is a former six-times Dutch National Champion and the World Cyclo-cross Champion for 1996; he was also twice a stage winner at the Tour de France and a winner of several Classics during his career. His maternal grandfather was French cyclist Raymond Poulidor, winner of the 1964 Vuelta a España, who also finished the Tour de France in runner-up position three times and in third place five times.