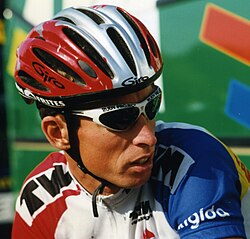 Bertus ("Bart") Voskamp (born 6 June 1968 in Wageningen, Gelderland) is a retired road bicycle racer from the Netherlands, who was a professional rider from 1993 to 2005. He competed in five Tours de France. He also competed in the team time trial at the 1992 Summer Olympics.

In the 1997 Tour de France, on stage 19, Bart Voskamp crossed the finish line first, just before Jens Heppner. However, both cyclists were disqualified for touching each other during the sprint, so the victory went to former third place Mario Traversoni.