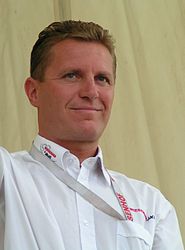 Jens Heppner (born 23 December 1964) is a German former road bicycle racer. He wore the pink jersey as leader of the general classification during the 2002 Giro d'Italia. Although he rode for Telekom during ten years, he has consistently denied ever having doped.

His name was on the list of doping tests published by the French Senate on 24 July 2013 that were collected during the 1998 Tour de France and found positive for EPO when retested in 2004. He won the German National Road Race in 1994.   After his career, he worked in his own company in Hergenrath (Germany).