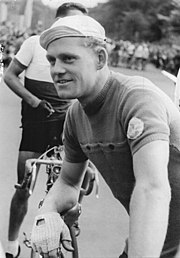 Gustav-Adolf "Täve" Schur (born 23 February 1931 in Heyrothsberge, Province of Saxony) is a former German cyclist and one of the most popular sportspeople in East Germany. His sporting career began with SC DHfK Leipzig. He was the first German to win the amateur competition of the World Cycling Championships and the Peace Race. Between 1959 and 1990 Schur was a member of the Volkskammer, the East German parliament.