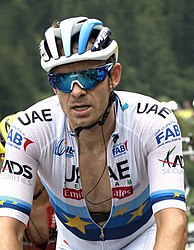 Alexander Kristoff (born 5 July 1987) is a Norwegian professional road bicycle racer, who currently rides for UCI WorldTeam UAE Team Emirates. He won the Norwegian National Road Race Championships in 2007 and 2011. His biggest victories have been the 2014 Milan–San Remo and the 2015 Tour of Flanders among many other successes.