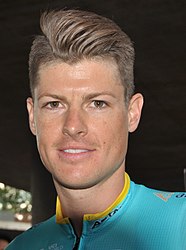 Jakob Diemer Fuglsang (born 22 March 1985) is a Danish professional road racing cyclist, who currently rides for UCI WorldTeam Israel–Premier Tech. Before turning professional for Team Saxo Bank, he was a mountain biker racing for Team Cannondale–Vredestein, winning the Under-23 World Cup and Under-23 World Championships.

Fuglsang has finished 7th overall at the Tour de France and 6th at the Giro d'Italia, his best result at a Grand Tour. His best career results are his win in the 2019 Liège-Bastogne-Liège, the 2020 Il Lombardia and his overall wins in both the 2017 and 2019 editions of the Critérium du Dauphiné stage race, in the former of which he won two stages. He has also won several other stage races during his career including Danmark Rundt 3 times in a row from 2008 to 2010, Tour de Luxembourg and Tour of Austria in 2012, and Tour of Slovenia in 2009.