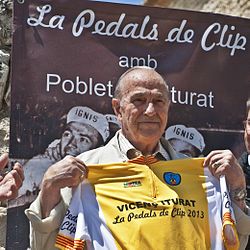 Vicente Iturat Gil (22 August 1928 in Alcalà de Xivert – 18 August 2017 in Vilanova i la Geltrú) was a Spanish professional road cyclist. A sprinter, Iturat won the Points classification in the 1957 Vuelta a España, as well as four stages of the Vuelta a España throughout his career. He also competed in multiple editions of both the Giro d'Italia and the Tour de France. He also notably won the Euskal Bizikleta stage race in 1953.