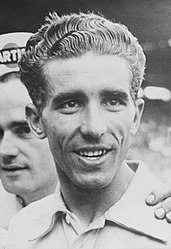 Federico Martín Bahamontes, born Alejandro Martín Bahamontes (pronounced [feðeˈɾiko maɾˈtin βa.a.ˈmon.tes]; born 9 July 1928), is a Spanish former professional road racing cyclist. He won the 1959 Tour de France and a total of 11 Grand Tour stages between 1954-1965. He won a total of 9 mountain classifications and was the first cyclist to complete a "career triple" by winning the mountain classification in all three Grand Tours. Following his retirement, Bahamontes ran a bicycle and motorcycle shop and was named the best climber in the history of the Tour de France by a panel organised by L'Équipe in 2013.