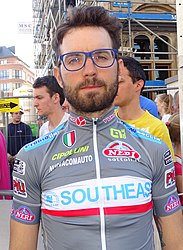 Born in Cecina, Tuscany, Favilli was also a member of the Arianna Rimor and AGI Neri Lucchini Sprint teams as a junior, finishing second in the Italian junior championships, as well as winning a bronze medal in the world championships – as part of an all-Italian podium alongside Diego Ulissi and Daniele Ratto – in Aguascalientes, Mexico. After moving out of the junior ranks, Favilli competed for the Neri Sottoli-Promociclo and Petroli Firenze teams as an amateur, and also had two stagiaire spells with Farnese Vini–Selle Italia, when it was known as ISD and ISD–NERI in 2009 and 2010 respectively.