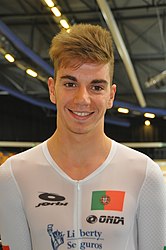 Ivo Emanuel Alves Oliveira (born 5 September 1996) is a Portuguese racing cyclist, who currently rides for UCI WorldTeam UAE Team Emirates. He competed in the points race at the 2016 UCI Track Cycling World Championships. His twin brother, Rui Oliveira, is also an international track cyclist. In 2018, he became the first Portuguese rider to win a medal in the UCI Track Cycling World Championships. In October 2020, he was named in the startlist for the 2020 Vuelta a España.