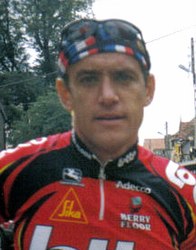 Jacky Durand (born 10 February 1967 in Laval, Mayenne) is a French former professional road bicycle racer. Durand had an attacking style, winning the Tour of Flanders in 1992 after a 217 kilometres (135 mi) breakaway, and three stages in the Tour de France.

Durand turned professional in 1990. He was national road champion in 1993 and 1994 and won Paris–Tours in 1998, the first French winner in 42 years. Durand rode seven Tours de France, finishing last in the 1999 race. In 1995 he was the surprise winner of the prologue, starting before it began raining. He wore the yellow jersey for two days. Durand won the combativity award in the 1998 and 1999 Tour de France; the latter year he also took the Lanterne Rouge. He retired at the end of 2004. He has since worked for Eurosport as a commentator.