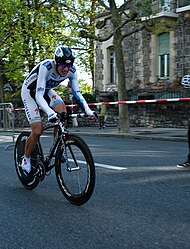 Jason McCartney (born September 3, 1973 in Honolulu) is an American former professional road racing cyclist, who rode professionally between 1999 and 2013 for seven different teams. His 2004 Tour de Georgia stage win led to his being named the "North American rider of the year" by VeloNews Magazine. He represented the USA Olympic team in the road racing event in 2004 and 2008. Jason is also a graduate of the National Outdoor Leadership School. He lives in Coralville, Iowa.