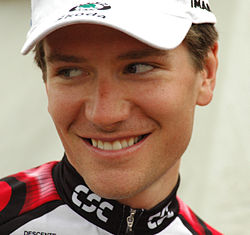 David Zabriskie (born January 12, 1979) is a retired professional road bicycle racer from the United States, who competed as a professional between 1999 and 2013. His main strength is individual time trials and his career highlights include stage wins in all three Grand Tour stage races and winning the US National Time Trial Championship seven times. Zabriskie is known for his quirky nature, including singing before stages and the interviews he does with fellow riders in the professional peloton which are posted on his web site.

In 2005, he became the third American to wear the leader's yellow jersey at the Tour de France, after winning the prologue of that year's Tour. However, later admissions of drug use during that time caused him to be stripped of his stage win and the resulting yellow jersey.

On October 10, 2012 – while a member of the Garmin–Sharp squad – it was announced by USADA that he would be suspended for six months for admissions of doping during his time with the US Postal Cycling Team. Later that day, Zabriskie confirmed his acceptance of a six-month ban from September 1, 2012 ending on March 1, 2013 along with a stripping of all race results between May 13, 2003 and July 31, 2006.