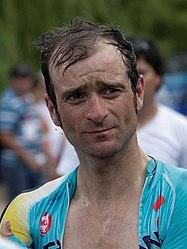 Michele Scarponi (25 September 1979 – 22 April 2017) was an Italian road bicycle racer, who rode professionally from 2002 until his death in 2017 for the Acqua e Sapone–Cantina Tollo, Domina Vacanze–Elitron, Würth, Acqua & Sapone–Caffè Mokambo, Androni Giocattoli, Lampre–Merida and Astana teams. He was declared the winner of the 2011 Giro d'Italia after the disqualification of Alberto Contador. Other major results of his career were the 2009 Tirreno–Adriatico, the 2011 Volta a Catalunya and the 2011 Giro del Trentino stage races.