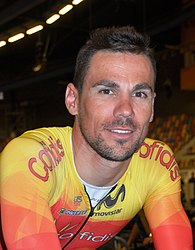 Eloy Teruel Rovira (born 20 November 1982) is a Spanish cyclist. At the 2012 Summer Olympics, he competed for Spain in the Men's Omnium. He signed with the Movistar Team for the 2013 road season, and joined Jamis–Hagens Berman for the 2014 season. As a rider for the Jamis team at the prestigious Tour of California, Eloy gained widespread coverage for celebrating what he believed to be a victory in the 7th stage, a lap before the end of the race; he ended up 56th.