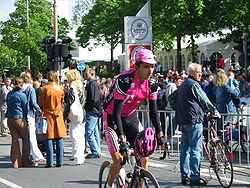 Giuseppe Guerini (born 14 February 1970) is a retired Italian professional road bicycle racer. He was known throughout his career as a climbing specialist and had pronounced success in cycling's Grand Tour events. He completed six editions of the Tour de France, five Vuelta a Españas and four Giros, managing two third-place finishes in the 1997 and 1998 Giro d'Italia.

He began his professional career in 1993 with Navigare and subsequently joined Team Polti in 1996. It was during his tenure with team Polti that he achieved two podium finishes at the Giro d'Italia. He then switched to the German T-Mobile Team from 1999 to 2007. He retired from cycling at the end of 2007.

He is also remembered for an incident during the difficult Alpe d'Huez stage of the 1999 Tour de France. Guerini was leading the field and only a few hundred meters from the finish line when a cycling fan knocked him off his bicycle while attempting to take a photograph. Guerini was able to remount his bicycle and finish 21 seconds ahead of Pavel Tonkov.

Guerini is a native of Gazzaniga, Lombardy.