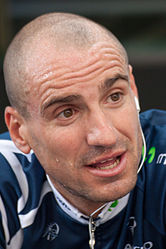 Juan José Cobo Acebo (born 21 February 1981 in Torrelavega, Cantabria) is a retired Spanish professional road racing cyclist. He won the 2011 Vuelta a España as a Geox–TMC rider, his first and only major title but in July 2019 he was stripped of this title after being found guilty of doping by the UCI. He was considered a climber who also is able to time trial.

On 13 June 2019, the UCI stated that Cobo had been found guilty of a doping violation, based on his biological passport data.